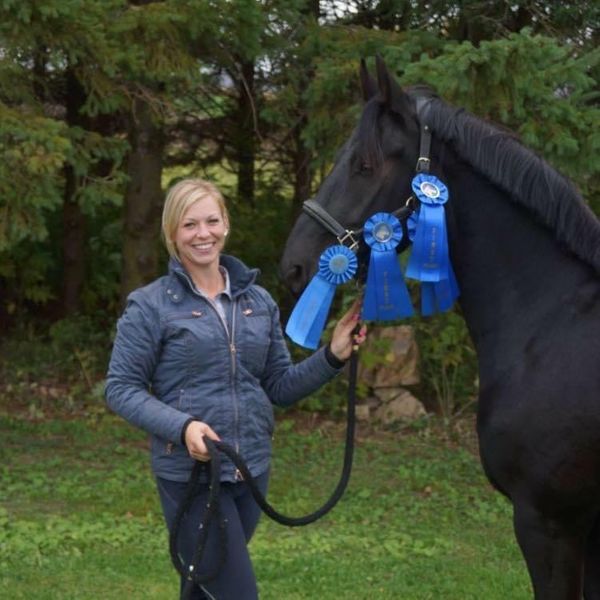 Jennifer (Jenny) Foss is a Dressage professional originally from Walton-on-Thames, England. Jenny has dedicated the last decade to the industry running a successful Dressage stable for over 10 years while continuing her education and competing at shows.

After starting Dressage at a young age at a local Dressage Academy Jenny fell in love with the details of the sport, and all aspects of meticulous horse care. In 2011 Jenny’s dreams of having her own facility would come true when she purchased Ivory Hills Stable in Wilson, WI. During this time Jenny focused her education on 3 specific things to help her become a well rounded horsewoman: Care, Horsemanship, and Classical Dressage. Jenny worked closely on a daily basis for two years with Ken Larson learning Natural Horsemanship and young horse starting techniques that have greatly influenced her program. Kris Hansen has helped her identify and learn about the Pathomechanics of a horse. In addition, she taught Jenny about specialized care and how to bring along and maintain special needs horses. For 8 years Jenny has trained consistently with Grand Prix Dressage rider Adam J. Steffens and frequently attends clinics with other top riders. Jenny continues to make education a priority while developing her own competition horses from the very start. Currently, she is developing her home bred Oldenburg gelding Prasad up the levels.

During Jenny’s time running IHS in Wilson, WI she was able to obtain her bronze medal as well as her rider achievement awards through third level. She has ridden in multiple regional championships and US Finals. Many of her students have competed in and won regional championships, competed at US Finals, and Seat Medal finals. Jenny’s passion is training YR/JR riders and she takes great pride in instilling good horsemanship and proper basics.

After 10 long years with brutal Midwest winters Jenny set her sights on warmer weather for a better standard of life for her animals and herself. She fell in love with Texas and in 2021 she sold IHS and landed at White Fences Equestrian Center. She is excited about continuing to develop her homebred horses to the FEI levels and helping guide students to success with their animals, from beginner to Grand Prix.