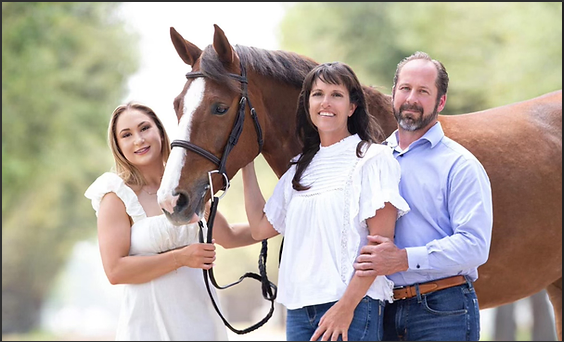 Lacy began riding in Austin, Texas in 1977, showing successfully locally and on the national level throughout her childhood. Over the course of her junior years, Lacy worked with Steve Hummel, William Martin, George Sayo, Mike McCormick, Orley Dehoyas, and Phoebe Johnson, and competed in her first Grand Prix at age 14. During her high school years, Lacy focused on equitation, going on to win several medals in the AHSA, USEF, and Maclay, as well as numerous other accolades.

Lacy attended Texas A&M to study Exercise Physiology and Business, where she played on the polo team and showed on the IHSA team, while also continuing to show nationally. After winning a scholarship, Lacy trained and showed under the tutelage of the legendary George Morris for several months. Following college, Lacy continued to bring along young horses while managing her retail stores and clothing company.

In 2006, Lacy returned to Austin to begin her career as a trainer. Since becoming a professional, she has trained several successful young riders to compete at Junior Finals, Medal Finals, and helped these young riders continue their development through NCEA Scholarships. Lacy's own daughters, Caitlin and Mackenzie, are proof of her keen eye and training ability. Caitlin Hudson, the eldest, accumulated many awards in the equitation ring throughout her junior career and now pursues a Master of Business Administration at Concordia University, while also starting and training her own young horses. Mackenzie Hudson turned to the jumper ring early in her junior years and has only excelled from there. Through the training, experience, and opportunities she gained by Lacy's hand, Mackenzie first stepped into the FEI ring in 2019, earning 8th place in a 2* Grand Prix. Today, Lacy and her family call White Fences Equestrian Center home. She is a vital part of the EA team and we are honored to have the privilege of riding with her.